Who should be part of Kawartha Lakes’ development charges task force?

Ward 9 Coun. Andy Luff argues that developers should not be part of the task force that will review the background study that proposed a 400 per cent increase in development charges 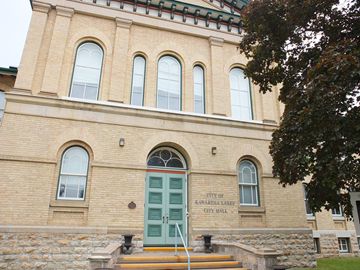 (KAWARTHA LAKES) The City of Kawartha Lakes is a step closer to putting its new development charges bylaw in place after council approved the creation of a task force to review the background study that supports it.

In August, most of the development and real estate community was in an uproar after staff recommended increasing the charges about 400 per cent, which would increase the price of a new home by $$27,000 (from the previous $6,700).

Development charges are the fees a municipality charges developers to fund growth. But, developers, while conceding the fees must increase, balked at such a significant increase all at once.

Following public meetings, council opted to phase in the charges in stages. They will increase on Jan. 1 and be fully implemented by Jan. 1, 2016.

At the time, Ward 8 Coun. Donna Villemaire proposed the creation of a task force of staff, councillors and developers to review the background study, completed earlier this year by corporate assets manager Adam Found.

Several local developers are questioning the numbers on which the background study is based. The study is legislated by the Development Charges Act and is required before the charges are increased.

On Tuesday, council received two reports; one outlined an amendment that director of development services Ron Taylor said was “administrative” and in keeping with the Act.

His report notes the phase-in of development charges that council approved in August replaced the original recommendation to implement the increase immediately. That amendment was brought to council on Tuesday.

The only local developer who appeared was Roger Cunnington, who told council that the proposed increase is “too much for local builders” to absorb. He said development charges do need to increase, but, “there has to be a process by which we can handle this without totally destroying our client base.”

Mr. Cunnington encouraged council to have “a meeting of the minds” and find a way to “cushion the blow.”

What council did approve was the terms of reference for the task force, but, Ward 9 Coun. Andy Luff was against the idea, especially since the group will include developers.

He compared it to having “the fox in the henhouse” and said developers don’t want to see the fees increase. Coun. Luff said it is staff and council – the City – who should be setting the fees.

Ward 11 Coun. Patrick O’Reilly wanted staff’s assurance that council would, in the end, be making the final decision. Mr. Taylor assured him the intent of the task force is not to pick a development charge to make everyone happy; that the increase would be based on the background study and the task force’s job is to review that study and address any concerns about the data it contains.

Following council’s approval of the task force, staff will seek members and bring back a report in November.

This article is for information purposes only.
Source: http://www.mykawartha.com/news-story/4915635-who-should-be-part-of-kawartha-lakes-development-charges-task-force-/