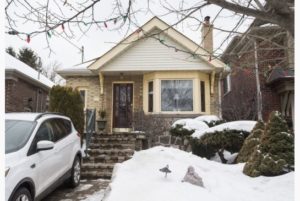 A snowstorm was in full force as the Feb. 8 open house got started in Leaside and the city was suffering through its 18th extreme cold weather alert of the year. Still, the crowds just kept coming.

Incredible as it seems, there were so many hardy house hunters packed into the 787-square-foot bungalow on Rumsey Rd. that bleak Sunday afternoon that realtor Ernie MacMaster twice had to lock the front door.

“I couldn’t keep on top of all the boots. I just put a sign out front saying ‘Thanks for waiting,’ ” said the veteran Royal LePage sales rep.

On Feb. 10 it sold for a staggering $1.051 million — $251,100 over the asking price — and became the newest member of a celebrated, and scary, club in Toronto, depending on your perspective: buyer or seller.

Last month the average sale price of a detached house in the 416 region sailed past $1 million as demand remains high for houses that don’t require a killer commute, and supply sinks to new lows.

“It’s not uncommon for it to be kind of crazy this time of year,” says Toronto realtor John Pasalis. “You tend to have a high number of buyers in the market in the first couple of months and the lowest number of listings. But this year sellers seem to have been reluctant to list because the weather has been so terrible and it’s really contributing to this heated market.”

Home sales in February were surprisingly hot — even with the record cold — as sales climbed 11.3 per cent over the same month a year ago.

Prices for all housing types — from condos to detached homes — were up 7.8 per cent in February across the GTA, bringing the average sales price to $596,193, according to figures released Wednesday by the Toronto Real Estate Board.

But demand remained particularly high for detached homes in the 416 area: sales in that category were up a stunning 16.9 per cent. So were prices, with the average detached home within Toronto exceeding $1.04 million, up 8.9 per cent year over year.

And it’s still weeks until the peak April to June spring market.

Veteran ReMax Hallmark realtor Thomas Cook blames the continued shortage of listings for pushing the price of even tiny bungalows, coveted by builders for their relatively large lots, over the $1 million mark. (The supply of homes listed for sale in February was down 8.7 per cent, year over year.)

The 12,793 properties listed across the GTA in February was the lowest number seen in the region since before 2000, the furthest back Cook has been tracking monthly sales and listings numbers for ReMax staff.

In fact, February’s listings were 23 per cent below the average monthly number of listings for the past 14 years, he said. Sales, on the other hand, were just 3.6 above average for the same period.

“It’s not that sales are outrageously high — it’s that the listings inventory is outrageously low,” said Cook in a telephone interview.

And that listings shortage is causing a strange sort of paralysis in the market.

“We’re seeing a lot of people who are now in their homes for eight or 10 or 12 years before they make a move. It used to be three to six years,” he said.

“That’s because of a combination of economic stuff, because prices have gone up so much, because it’s so expensive to move (with land transfer tax and realty fees) and incomes just haven’t kept up.”
Read more

But that doesn’t seem to be dampening buyer enthusiasm, sustained by interest rates that remain at historic lows.

Realtor Sue Wade West got 10 offers in February on a Leaside bungalow with old gumwood trim, knob-and-tube wiring and original windows. All 10 offers were from builders planning to tear the house down and rebuild.

“I have clients who have been sitting on the fence saying, ‘I know this market is going to crash,’ ” said Wade West. “They’re waiting for interest rates to go up and then they think house prices will come down and they won’t have to fight over a piece of property.”

She warns them there are no signs of the market slowing down.

Townhouses — now highly sought after as the most affordable form of housing next to condos — were also in high demand with sales up 13.6 per cent in February, year over year.

Townhouse prices, however, were down 7 per cent in the 416 region, to an average of $507,843. In the 905 regions, the average sale price of a townhouse stood at $433,127 last month, up 8 per cent year over year.
Condo sales were surprisingly strong, up 10 per cent year over year, and prices held relatively steady despite escalating supply, up 2.4 per cent across the GTA.

That brought the average price of a condo in the 416 region to $369,655 in February, down 0.9 per cent year over year, while condos in the 905 regions saw sale prices climb by almost 11 per cent, to an average sale price of $322,055, significantly narrowing the gap between buying a condo in the city versus the suburbs.

This article is for information purposes only.
Source: http://www.thestar.com/business/2015/03/04/average-price-for-toronto-detached-house-passes-1m-in-february.html